Summer is here, and so are our monthly news! People kept busy despite the heat and some interesting changes will be coming to the mobile industry, let’s dive in!

Google allows third-party payment in the Play Store in Europe

Google has finally decided to allow alternative billing systems for in-app transactions and purchases in the European Economic Area. This is only for non-gaming apps on the Play Store. The announcement came just after the EU voted on the Digital Markets Act, a bill that would push both Apple and Google to allow third-party payments in their app stores.

Developers who use an alternative billing system will still have to pay a 12% fee (so a 3% reduction) and “need to meet appropriate user protection requirements”.

Meanwhile, Apple made third-party payment available in South Korea following the new local law. They haven’t communicated about a potential adaptation to the future arrival of the DMA in Europe.

Regarding web ads, Google is pushing off its deadline to end tracking cookies to 2024.

Google reaches an agreement with developers for the Play Store

Following antitrust allegations, Google has reached a settlement with developers. As such they will establish a $90 million fund to support US developers who’ve earned $2 million or less annually between 2016 and 2021. Developers that “qualify will be notified and allowed to receive a distribution from the fund.” 48,000 small developers should be qualified for a payment ranging from $250 to $200,000.

Google has also committed to: 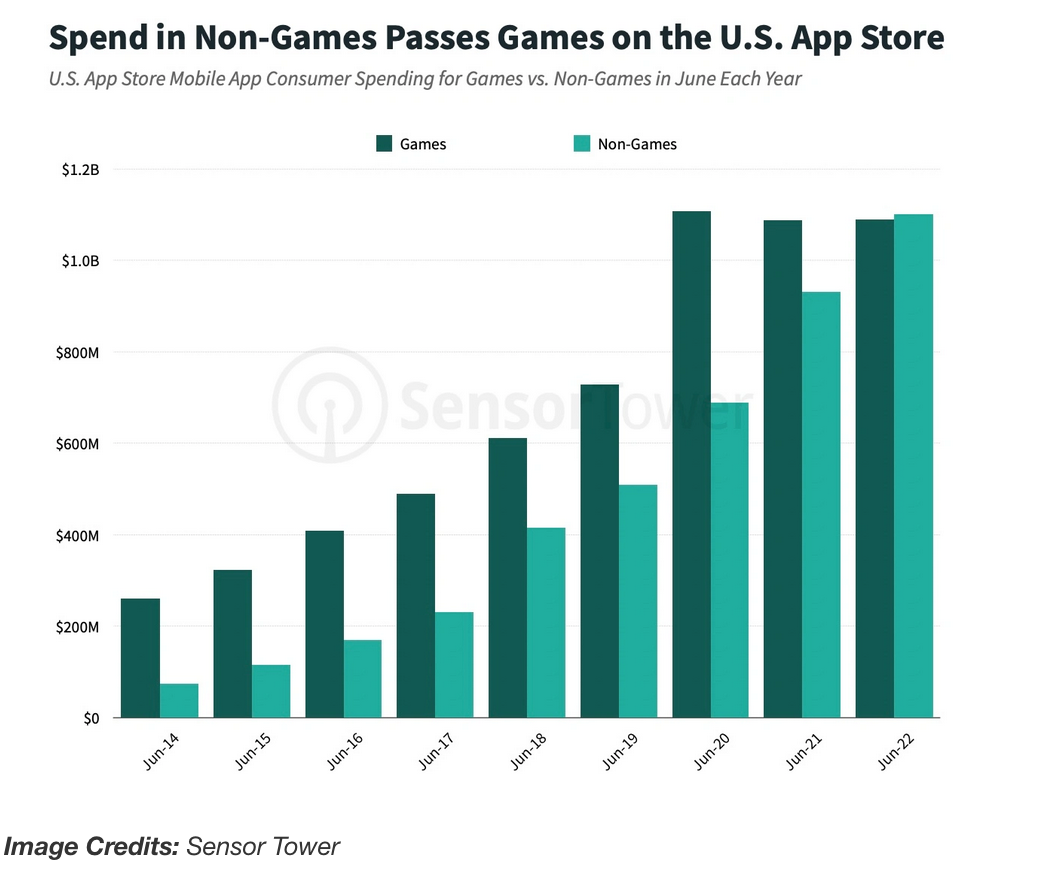 The rise of subscription apps on the App Store may have helped non-game apps reach that goal. We’ll see how that new trend holds during the second half of the year.

In August, Apple will hold live presentations focused on the App Store for developers who are part of the Apple Developer Program. It will go over the App Store’s features and help developers learn how to attract new customers and develop marketing strategies.

Participants will be able to ask questions to the experts during the sessions. Registration is already available, you can see the full schedule here.

As of July 20, the Data safety section is fully mandatory. Google is now warning “non-compliant new app submissions and app updates” that don’t fill out the Data safety form. Developers have until August 22 to fill out the form, if not, they won’t be able to publish new apps and/or updates. Longer than that and apps may be removed from the Play Store.

In addition to that, the old list of app permissions will still be available on app pages following user feedback.

According to Sensor Tower’s latest numbers, TikTok is now officially the app where users spend the most time with an average of 95 daily minutes of use. Instagram is relegated to 3rd place, right after YouTube, and just before Facebook, standing in 4th place.

Not great news for Facebook which reported a year-over-year revenue decline. According to Mark Zuckerberg, Meta faces “one of the worst downturns that we’ve seen in recent history”.

Even though others in the ad sector are also facing a slowdown in growth, Meta is also grappling with advertisers diversifying their ad spend with Meta’s competitors. After all, Milan Strba told us, diversification is the future of app marketing.

Unity is merging with ironSource

One of the biggest news of the month was the surprise merger between Unity (a cross-platform game engine and an ad network) and ironSource (an ad network). The CEO of Unity, John Riccitiello, said in a statement that “the combination of Unity and ironSource better supports creators of all sizes by giving them all the tools they need to create and grow successful apps in gaming and other consumer-facing verticals like e-commerce”.

According to AppFigures, more than 285 thousand mobile games available on the App Store and the Play Store are powered by Unity, and 260 thousand use Unity’s ad network. On the other side, 70 thousand games use ironSource’s SDK to monetize across both app stores, and half of those games are built with Unity.

In a new step in the Elon Musk/Twitter acquisition drama, Elon Musk has stated that he does not wish to buy Twitter anymore. Musk already owns 10% of the company’s shares, but earlier this month he sent a letter to Twitter to terminate the merger agreement. The acquisition was supposed to cost him 44 billion dollars.

He first put the deal on hold to investigate the number of spam and fake Twitter accounts. He now claims that Twitter “made misleading representation over the number of spam bots on the social network and hasn’t “complied with its contractual obligations” to provide information about how to assess how prevalent the bots are”.

However, since the original deal included a $1 billion penalty clause if either Musk or Twitter ever backed out of the agreement, Twitter will bring the matter to court later this year. Both sides are set to go to trial for five days in October, as a Delaware judge ruled.

Instagram ignores everyone’s wishes and barrels on with Reels

If you were still holding on hope that Instagram would go back to being the photo app everyone loved, you might want to skip this news. Adam Mosseri announced that they were going (even more) all in with Reels! Now, every new video under 15 minutes will automatically be turned into a Reel.

Users are not convinced, many of them are demanding that Instagram goes back to being focused on photos instead of trying to become more like TikTok, to no avail.

This post has been shared by a great number of accounts after Mosseri’s announcements. Both small and bigger accounts. Even some of the biggest influencers of the platform have started sharing their concerns with the platform’s switch to video.

Following this outrage, Mosseri took the stand once again to tell people they were hearing their concerns but were still focusing on video (and they’ve admitted that their new tries for a video-centric feed were not very good yet). However, they insisted that they were focusing on video because users are sharing more videos, meanwhile, creators have complained that they were forced to create more videos because that was the only way to gain visibility. Almost 200,000 people signed a petition to ask for a return to a photo-centric feed.

As for those who wanted to see more pictures of their friends, he tells you to check your DMs for those, you’ll be more likely to see them there than on your feed.

What we talked about